As the end of 2013 approaches, it recently dawned on me that my limited miles (a single day in March) on the Scottish National Trail was a poor show, and so with Christmas turkey still weighing me down, I found time to ride the “easy” Slateford to Milngavie section (which I am labelling as “Part 3”, Peebles to Slateford having been “Part 2“, and “Part 1” still to be ridden).

In between 40mph winds and torrential downpours, the forecast suggested a couple of dry days. Boxing Day looked tempting, but the need to rely on my long suffering wife’s taxi services (in the absence of a Scotrail service) saw me delaying slightly to 29 December. Probably a wise move as I’m quite sure I’ll be cashing in lots of brownie points for her taxi services for other sections.

Whilst I intend to ride the mountain bike for the rest of the trail, the Slateford to Milngavie section is along the flat and relatively smooth Union and Forth and Clyde Canal paths for the most part, and so the lighter cyclocross bike with skinnier tyres seemed the better option. Having ridden to Linlithgow in early January before, I know how wet the canal towpaths can be, even on dry days, and so the Shimano waterproof boots were donned and the rear mudguard added to the bike.

The Slateford start is only a couple of miles from home (I pass the Scottish National Trail plaque at the Water of Leith visitor centre almost daily on my cycle to work as a constant reminder of my dilatoriness), so after a quick ride down the hill and the obligatory start photo shot, I was climbing the steps onto the Union Canal path.

The relative simplicity of this section of the trail means that I can keep the route description brief. The Union Canal allowed a brisk start, and although the prevailing westerly wind provided a bit of resistance, this day would be by far the flattest of the trail, and ideal for weary legs after a hard season of cyclocross racing and a long lingering cold. The section to Ratho was quickly dispatched, before the towpath began to resemble more of a cyclocross racecourse – skinny cyclocross tyres cutting through a sodden mulch of rotting leaves and mud. The plywood childrens’ television characters lining the banks towards Newbridge kept a colourful, if slightly menacing eye on my progress before the trail opened out on to more exposed sections through Winchburgh and Broxburn, where the leafy mulch was replaced by puddle after puddle and a slightly stronger headwind.

The flattest ride you will ever see? The lumpiest bits are actually before and after the proper Scottish National Trail sections.

The flat nature of the route reflects the impressive engineering involved – there is just a single lock between Edinburgh and the canal end by Falkirk. I always wonder if engineering like this would be undertaken nowadays – I’m sure it would be voted down by some quango as too expensive and not worth the bother. The tunnel a couple of miles before the Falkirk wheel is no less impressive, with jagged bare rock still visible on the roof and now well illuminated. Shortly afterwards the shiny and relatively new Falkirk wheel looms into view, alongside the only descent on the canal part of the route. The last time I visited here by bike was when at university in Glasgow – riding home with a friend was good way to avoid the Scotrail and Citylink fares, although we probably spent more than that in extra mars bars along the way. It was definitely a bit warmer then.

Pressing on past pedestrians staggering around the path, the route continues along the Forth and Clyde Canal towards Glasgow on wider but similarly puddly paths. By now the dog walkers were out in slightly greater numbers, and I was glad I had added the bell to the cyclocross bike. Ting ting. 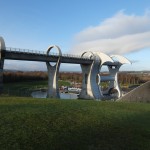 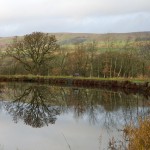 Looking towards The Campsies. (A fishing heron also just out of view) 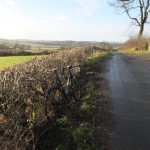 Quiet back roads for the last few miles into Milngavie

By the time I approached Cadder, I was growing weary of the long, flat miles and relentless (but thankfully not terribly strong) headwind, and was glad to turn off on to the road for a short climb up past the church and descent towards Cawder Golf Club. A brief wrong turn saw me heading along a tempting driveway towards the clubhouse before about turning and picking up the path through a line of trees that I should have seen the first time around.

After cutting through the village of Balmore, I continued over the second golf course – sneaking round the clubhouse and on to a good path. At separate points I passed two groundsmen – both exchanged brief pleasantries and neither seemed perturbed by a mucky cyclocrosser nipping round the course – right to roam working well in practice. The path through the club was relatively easy to follow (although not signposted, so I was glad of my Garmin mapping) and aside from cutting across a deserted fairway, followed a path which would trouble only the most wayward tee shot. From here, pleasant backroads (through Baldernock and a third golf course in as many miles – they love lairy polo necks, checked trousers and Jaguars in East Dunbartonshire) led onwards and down into Milngavie. Thankfully I followed a car through the fast flowing ford on Baldernock Road. I might otherwise have been tempted to power through, but going arse over tit on slippy cobbles in the final mile would have been an embarrassing way to finish the day.

Having briefly flirted with the idea of picking up the canal again near Kirkintilloch and riding home (making a 110mi round trip), I decided not to spoil a pleasant enough ride by turning it into a do-able but slightly wearing epic. Shunning the tempting tailwind back along the canal, I pedalled down the Kelvin Walkway and on to Glasgow Queen Street for a train back to Edinburgh. Just over 100km all in, confirmed by the muddy spray covering bike and legs. I’m sure the virtually empty carriage at my end of the train was nothing to do with that though.

All done, a pleasant day of riding, although I am looking forward to the more rugged sections more. The prevailing wind was never quite strong enough to make me wish I had ridden west to east (which seems sensible, but not quite in the spirit of the SNT) and the canal miles were easily ticked off. I was slightly unsure what to expect of the sections through golf courses, but all were walker friendly and posed no issues for considerate cyclocrossers either.

A paltry two days of riding on the Scottish National Trail in 2013, but I’m now itching to crack on in 2014. I will let the trails dry out a bit first, and hopefully tick off several days in March, April and May. Not least, Part 1 from Kirk Yetholm still needs tackled.

The trimmed down GPX file, showing only the part of the ride from Slateford to Milngavie is here.