The next stage of riding the Scottish National Trail has been a long time in the coming. Two young boys, a new job, lots of commuting and a house move mean that free weekends have been difficult to come by.

I’ve been looking forward to this stage for a while – a bit more remote, but logistically a lot easier than the next few sections. The first weekend in June 2016 could not have seen better conditions for riding (barely a drop of rain at home in Perthshire for the past four weeks), although being Scottish and needing something to complain about, the weather was, if anything, a little too warm.

Joined by Simon again (who rode the Comrie to Pitlochry section with me), we parked in the spiritual home of Velo Club Moulin and picked up the trail in Pitlochry early on Sunday morning, with easy riding alongside Loch Faskally and the River Garry northwards to warm up the legs. A mix of forest tracks and the odd sandy singletrack in woods that looked like they might contain lots of fun options for lucky locals.

Popping out onto a back road following the river from Killiecrankie to Blair Atholl allowed a few swift miles to be ticked off in the sunshine, before stopping for an early coffee and sublime carrot cake at The Watermill. This would normally be a bit early in a ride for a stop, but this would be the last chance before Kingussie – it would be barren glens from here on in.

The ride up Glen Tilt was exactly as I remembered it. Like many Scottish mountain bikers, I have ridden down here as part of the classic Beinn a’Ghlo loop (around the East side of Beinn a’Ghlo to Fealer Lodge, and then a great descent to and then down Glen Tilt). The riding up the Glen was uninspiring but brisk – easy Land Rover tracks follow the river, giving a chance to glance at the interesting pools and rocks in the river, with tall hills on either side (mental note: looks like there are a couple of rideable munros up here).

When the land rover track eventually peters out, the riding gets more entertaining, with singletrack punctuated by rock step ups and the odd burn crossing. Mostly rideable for those in the zone, but momentum is your friend here – satisfying to clean as many of these sections as you can. 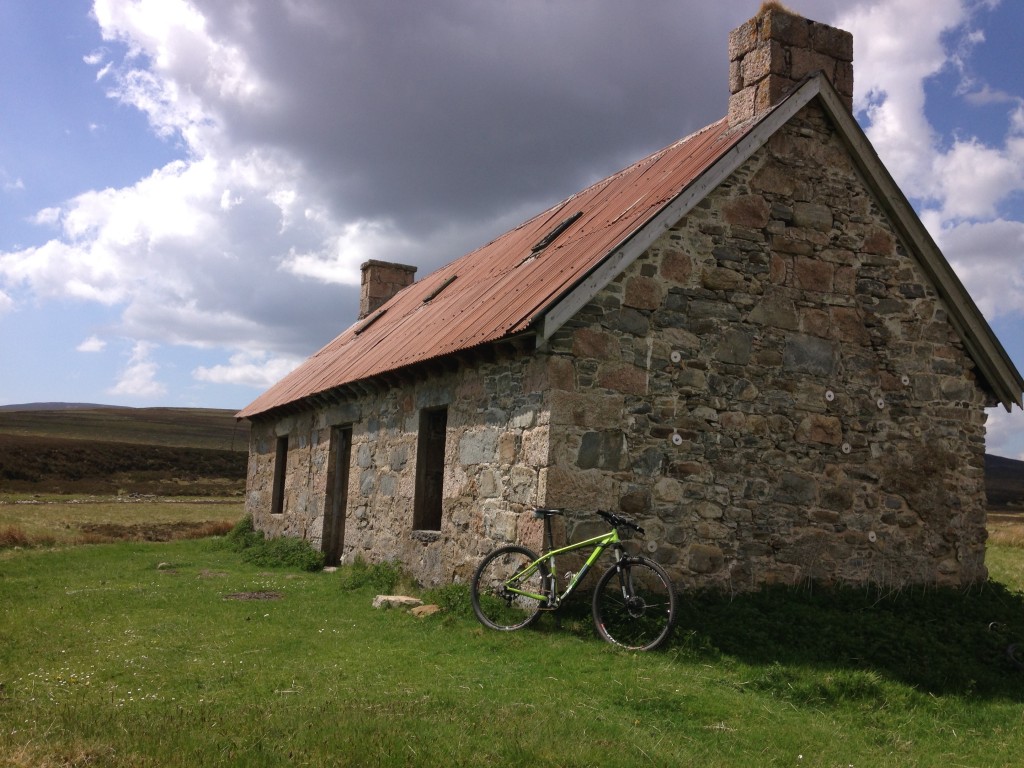 Lunch stop by the Geldie Burn

In this section, the route overlaps with the “Cairngorm Loop” – evidenced by the numerous bikepacking individuals we passed heading south. At the top of the Glen, passing the ruins of the Bynack Lodge gives a real sense of remoteness – by this point we have ridden for miles since the road, and when in use, the lodge would have been barely more accessible from the Braemar side either.

Crossing the Geldie Burn (disappointing the waiting hoard of walkers who were anxiously waiting to see if we would fall in), the route turns Westwards climbing gently alongside the Burn. At Geldie Lodge (another ruined hunting lodge) the double track runs out and the climbing gently continues across boggier singletrack.   After several dry weeks this was mercifully rideable, but this could have been a very different section in a wet Spring – several miles of burn crossing and bog could have been hard work. 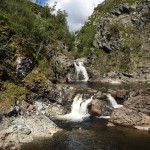 The Falls of Tarf looking inviting on a warm day

Lucky we packed the scaffolding

Huge trees washed out of gulleys by storms

A scaffolding crossing over the impressive waterfalls on the River Eidart marks the start of the track heading downwards. At this point a blown fork seal added to the creaky bottom bracket (from the aforementioned river crossings) and the spongy front brake so a steady approach was taken, as the forks pogoed up and down. At the top of Glen Feshie we chatted to a rider heading to Braemar from Aviemore for a week of work by riding up the way we had come, and then on to the Linn of Dee. Not a bad approach to commuting.

As we descended further down Glenfeshie, the trail becomes a mix of single and double track with numerous river crossings and a few freshly laid sections of new stone. The reason for the new sections soon became clear as we rode past numerous vast washed out gulleys – the power of the water here in previous winters has clearly been awesome, and it was interesting to see tiny burns running down vast scars in the hillside.

Eventually crossing on to the west side of River Feshie at Charnachuin, we picked up what is now a well surfaced estate road to tick off a few easy miles in the sun. Eschewing the obvious turn westwards through the forest, the route continues on this for a few more miles, instead turning into the forest only closer to Inshriach, and winding down towards Insh before doubling back to Kingussie. From here, a gentle mix of forest track, footpaths and the odd tarmac section brought us into Kingussie for some very well earned steak pies in the sun. Another stage dispatched, and the satisfaction of tired legs for the drive home. More of this sort of thing please. 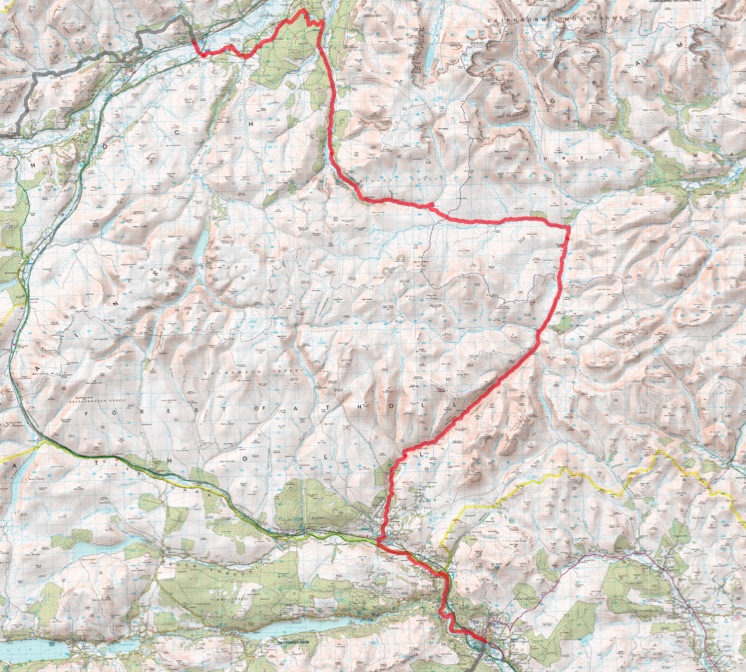 One thought on “The Scottish National Trail: Part 6 – Pitlochry to Kingussie”