After months of procrastinating, a sunny April finally allowed a chance to ride the first leg of The Scottish National Trail from Kirk Yetholm (close to the English Border) to Peebles. After riding the second and third legs solo last year, I was joined by XC whippet Dougie Shearer for this part.

Having left a car in Peebles at 8am, driving across the gentle rolling hills around Kelso didn’t quite prepare us for the slog which lay at the start of the ride. Although the “official” start of the trail is in the village square in Kirk Yetholm, it seemed rude to come this far south and not actually visit the border, so we set out southwards from Kirk Yetholm, up and down the minor road, up a grassy mound and on to a ridge along the Pennine Way. The border at this point is an inauspicious fence and stone wall which provided a handy spot for leaning a bike for the obligatory border photo, but little in the way of  grandeur. For all Cameron McNeish’s talk about discovering Scotland through his National Trail walk ahead of the referendum in September, the English side of the wall looked much like the Scottish side – rolling hills and scattered sheep as far as the eye could see. From here, a cloudless blue sky covered the whole of the eastern Scottish Borders in front of us, and it was easy to pick out where the route would head next. First though, we continued briefly southwards, climbing the ridge alongside the border and passing White Law and beneath the 549m summit of Black Hag, before performing an abrupt U-turn and finally being rewarded for the grassy slog with a fast single track and double track descent back towards the valley floor and on towards Kirk Yetholm.

Rejoining the trail northwards at our start point in the village square, the national trail at this point follows the waymarked “St Cuthberts Way” across fields, alongside rivers and joins the dots of the few notable mounds in the area – Crookedshaws Hill and Wideopen Hill. After the efforts of the initial start loop climb and these grassy mounds, I was starting to wonder about the 1×10 with 34t chainring I was running on the XC bike. Just managing to stay on top of the gear, I managed to spin and gurn upwards (thankful for bone dry grass at least) and on down to flatter sections through Morebattle and along minor roads past Cessford Castle. 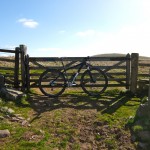 Here be dragons – the English border 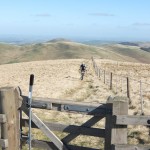 Climbing alongside the border 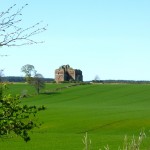 Although expecting the arrow straight Roman Road of Dere Street shown on the map to be a straight boring slog, in fact it turned out to be a lumpy single track trail through grassland and woods. I suspect the Romans didn’t have to put up with a relentless barrage of stiles and gates though. Or perhaps that’s why they didn’t venture too far north in Scotland. Almost as frustrating was a section alongside the River Tweed which I expected from the map to be flat and smooth, but which often involved a series of wooden stairs – sometimes inviting stair rides, but often time sapping walks. Continuing with the Borders tradition of ransacking and pillaging by marauding visitors from the south, a shortcut along the road allowed us to empty the local Co-op in St Boswells before turning towards Melrose. The route again makes a bee-line for the only notable hills in the area – the steep twin mounds of the Eildon Hills which I knew well from childhood walks. Thankfully the route passed relatively painlessly through the middle before descending in to Melrose and resuming the march along the Tweed and picking up the NCN cycle route. The easy miles of the old railway line were cut abruptly short as the new Borders railway line re-emerged on to the old route, necessitating a slight detour on to the main road before traversing the side of Gala Hill.

By now the long climbs were taking their toll – my legs were still working, but only at a slower pace and Dougie had been off colour but ploughing on all day. After debating the merits of lassoing a few lambs to tow us up the hill, we instead settled for haribo and strawberry laces as a better source of fuel. Passing by the summit of Hog Hill, it slowly dawned on us that although the Three Brethern looked teasingly close, the Selkirk road still lay in the way, and sure enough, our hard won height was again lost as we dived down to the road and immediately back up into the Yair Hill Forest. 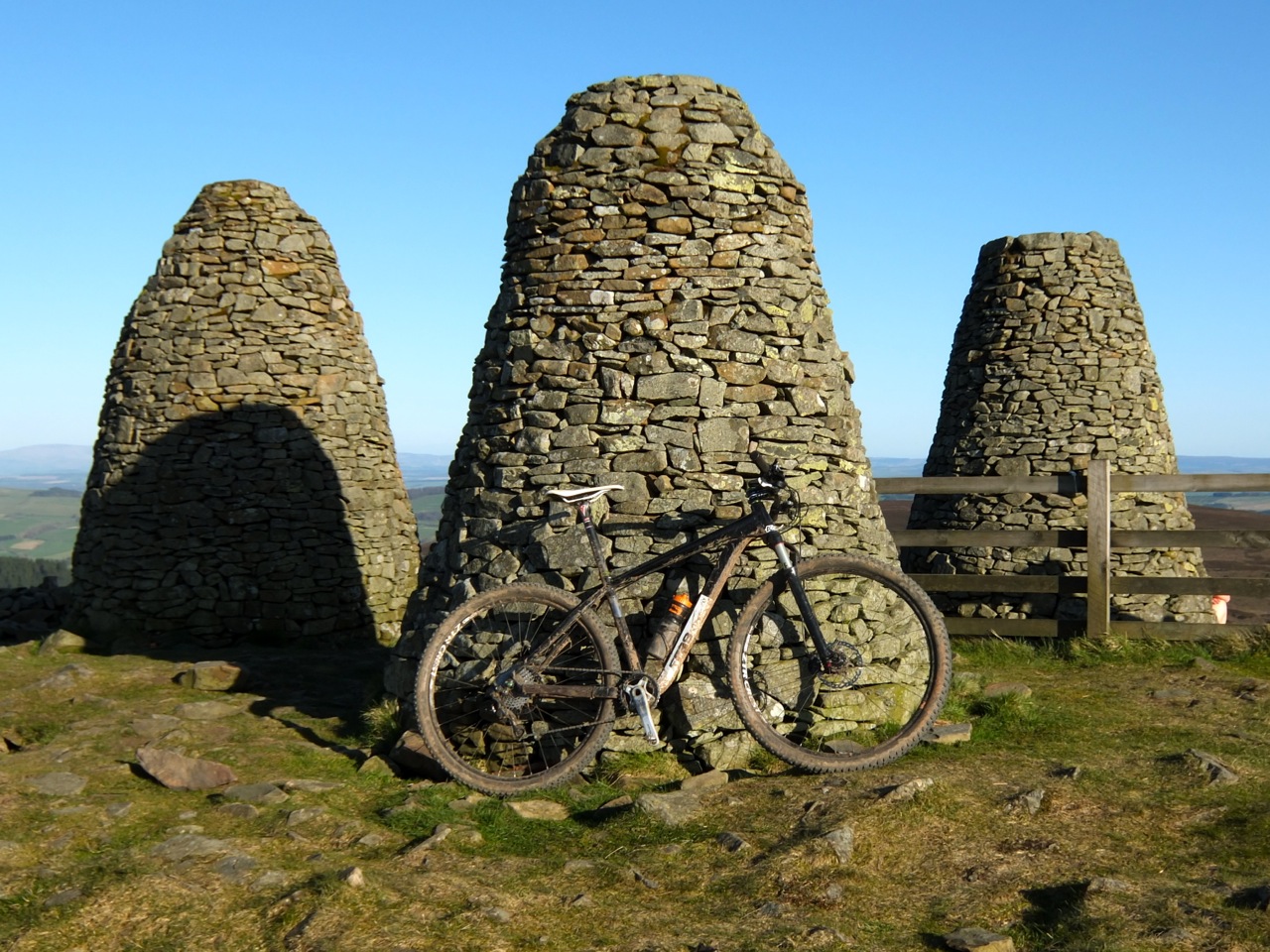 The impressive stone cairns of the Three Brethern will be a welcome sight to anyone who has ever raced the Selkirk MTB Marathon. Thankfully the late afternoon weather was a little more welcoming than some previous trips where we had struggled to stand upright here, so final fuel was taken on board before the fast ride along the ridge on familiar trails on to Minch Moor. Eschewing the tempting swoopy trails of Innerleithen, we bee-lined down the Southern Upland Way path, startling some poor chap relieving himself against a wall as we zipped by at 30mph. By this time I was already pushing my luck for time, so we time trialled along the road past Traquair and into Peebles, skipping McNeish’s short detour into the adjacent woods, and arriving back at the car almost 10 hours after setting off from Kirk Yetholm.

Although the long grassy climbs, relentless gates and Dougie’s illness had added to the time (we had both expected 7 hours to be sufficient), there was a good sense of smug satisfaction after ticking off almost 70 miles of off road riding on dusty trails. Again, the route had been mostly rideable (with a bit of gurning required for some of the steeper climbs, and a bit of walking required for a few riverside steps) but it would certainly have been a bit more of a muddy slide in wetter weather.

Personally, I have now ticked off a total of around 150 miles from Kirk Yetholm to Milngavie, and once I have re-earned the brownie points required to make up for being 3 hours late home from this part, I’m looking forward to a two day stint from Milngavie to Pitlochry next. As the route heads further north, this first stage has reminded me that (i) a lower gearing might be sensible, (ii) I always get sunburnt on the first big sunny day out of the year, and (iii) I need to pack more Haribo. Hopefully a few words on Parts 4 and 5 might follow later in the year.

Finally, a tip of the hat to Dougie for still having the presence of mind after 10 hours in the saddle to stand on the brakes and avoid the wild boar that wandered in front of the car on the return to Kirk Yetholm in the evening. That certainly woke me up, not least with thoughts of wild boar burgers. Mmm….

The GPX for my “Part 1” (which uses a couple of km of road shortcut at St Boswells and past Cardrona) can be found here.