After the easy logistics of the last section of the National Trail, the section to Fort Augustus looked a bit trickier, with the finish being a long drive from the start, and miles from a train station. A holiday cottage for the week in Fort Augustus solved that issue though, and I was duly turfed out of the car in Kingussie, to leave my wife and children to finish the drive up on their own.

The first few miles out of Kingussie were on what looked like a relatively new and well signposted walking trail, climbing through the woods towards Loch Gynack. Unfortunately the awkwardly placed stone steps meant that whilst this would make an interesting descent, it was an impossible climb in places, unless your surname is MacAskill. At least when Loch Gynack came into view, the singletrack improved to that well drained, pine needle covered stuff which is so common in the Cairngorms. On approaching Newtonmore, a “wildcat” trail offered the possibility of singletrack through managed woods, but unfortunately this did mean more gates per metre than even the worst sections of the West Highland Way. Ride, dismount, unchain, open, close, re-chain, remount, repeat. No wildcats spotted either. Harrumph.

Emerging on to the Newtonmore to Glen Banchor road allowed a few miles to be ticked off on tarmac and then good double track. Unfortunately the pace slowed again as the path petered out through Glen Banchor, and time was wasted dithering at river crossings. After ditching the socks and shoes for the first major crossing, getting damp feet on the subsequent bogs meant I adopted a rather more relaxed attitude to subsequent splashes. At least in double figure April temperatures your feet soon dry off.

Keen to make up some time when emerging to the good track at Strath an Eilich, I overshot my planned off-piste turnoff when doing 20mph down hill, but was in no mood to back track for the sake of another boggy “footpath”. Continuing down through the grounds of Cluny Castle just meant that I emerged on to the A86 a mile earlier than expected. 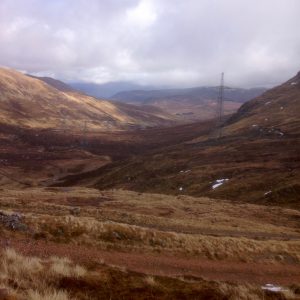 The ride through Laggan towards to the Melgarve Bothy was as expected – easy riding, but a bit sloggy into a stiff April headwind. Despite the knobbly winter tyres remaining installed, I caught and passed a few other riders. The fourth hybrid rider I passed sat in my slipstream until I glanced over my shoulder and just about needed a change of trousers when I realised he was there. Good company for the last few miles took my mind off the tarmac slog, as we chatted about the estate and its new owners, and the relative remoteness of the cottage he was riding back to. I bade him farewell at the Melgarve Bothy and continued the slog up and over Corrieyairack on my own. Although mostly rideable, a long week at work meant I was feeling pretty knackered before the start, and so I took the easy option of walking round a couple of the looser, steeper hairpin bends on the zig-zag section near the top. Ascending into the clouds, the Beauty-Denny tower lines were barely visible through the gloom, but I soon dropped out of the greyness again, to open views of the hills and forests on the north side of Loch Ness. Regardless of your views on development in these locations, you have to be impressed by the engineering that goes in to building overhead power lines at this height, in these remote locations.

From the top of Corrieyairack Pass it was (almost) all downhill for the run into Fort Augustus:- smooth tracks, a mile of a back road and a quick jaunt through a graveyard all that stood between me and putting my feet up in our holiday home for the week. Another section ticked off, and now definitely with a more Highland feel – higher passes and big hills all around. Onwards and northwards… 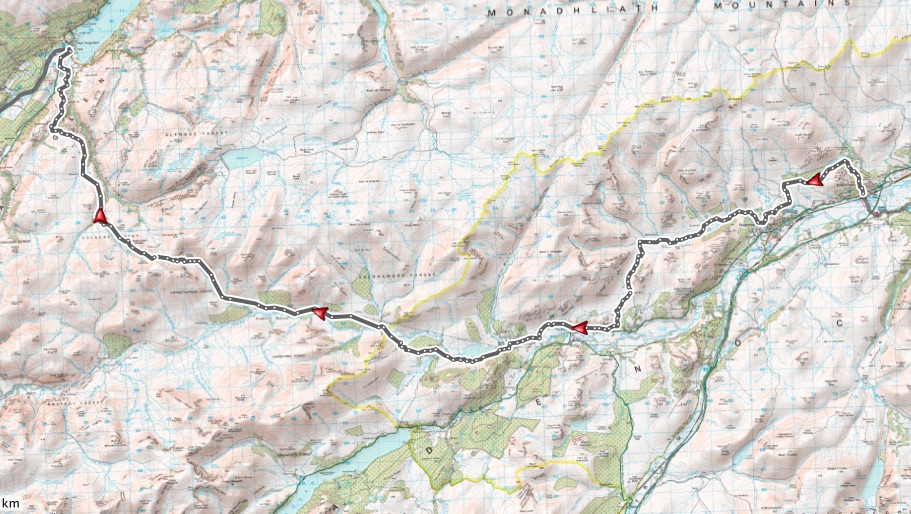 The GPX for the ride can be found here

One thought on “The Scottish National Trail: Part 7 – Kingussie to Fort Augustus”