A recent discussion on this ride got me thinking about writing up a few words on riding the East Highland Way in “Spring” 2012 (more on that below), which might help anyone else looking to ride the route in future. 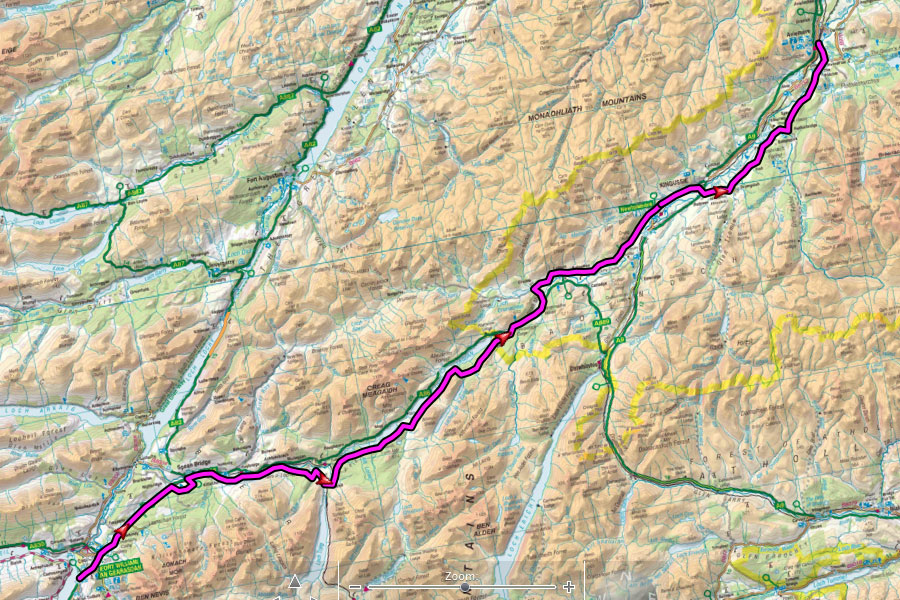 Having ridden the Great Glen Way between Fort William and Inverness a couple of times (once over 3 days as a student and again in a day more recently) I liked the idea of a big day on the mountain bike following trails that I might not otherwise ride. Whilst some might prefer to create their own route with more technical riding rather than riding a tame set trail, I find the latter attractive occasionally, as it is good to get the head down knowing that a rideable trail lies ahead, without having to think too much about following a complicated route through bogs.

The idea of the East Highland Way is to form a new long distance route (aimed at walkers) linking the end of the West Highland Way in Fort William with Aviemore in the central Highlands. Having looked at a few other long distance options, good train links at either end made this an attractive option – there is a handy 4.50am train from Edinburgh to Fort William which I used the previous year for the Great Glen Way. I knew short sections of the route and crucially it seemed to be mostly rideable.

The idea of riding the route was parked for a few months until some encouragement from Rob Lee to ride 1,000 miles in a month saw me finally getting a date in the diary. March 2012 was a glorious month with unseasonably high temperatures and sunny days. Unfortunately as the set date of 3rd April approached, there was a last throw of the dice for winter, with heavy snow forecast for much of Scotland overnight into the 3rd. Leaving the house at 4am I was treated to damp roads and sleet showers on the way to the train where I settled in for a good snooze. Waking up somewhere north of Glasgow I was greeted by the expected blanket of snow in the early light and was keen to get riding. 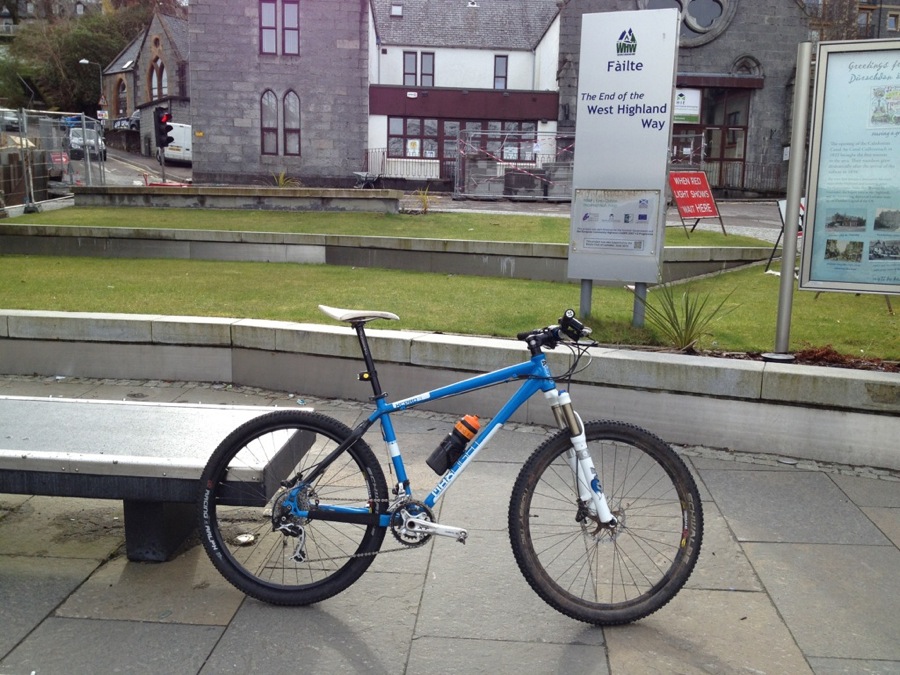 The start of the East Highland Way (which is not currently a waymarked route) is at the end of the West Highland Way so on stumbling off the train (and losing a rear light before I even started) I headed along to the end of the high street for the obligatory start photo. The first section through town was quite straightforward and then followed the cycle path alongside the A82 which will be familiar to anyone who has ever ridden up to Nevis Range.

I knew the section to Spean Bridge, having ridden it in reverse a couple of times so it was good to get some brisk miles in early on, leaving the tarmac cycle track and picking up a firetrack familiar to 10 Under the Ben riders before turning off onto a good doubletrack. A quick road section near Spean Bridge brought me into the village via a short offroad descent where I managed to snap a spoke before a coffee stop. Not quite going to plan, but at least the weather was good. 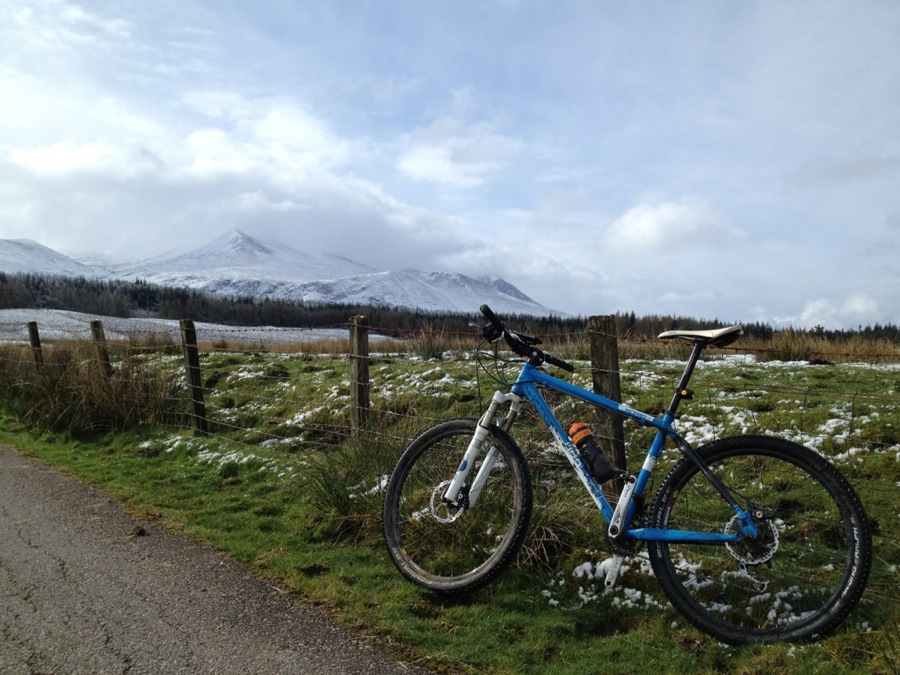 The XCPro3 against the stunning scenery

After a quick battery recharge (for both me and the phone I was using for route navigation) I set off on a good back road / dirt track towards Tulloch, following the River Spean. Eventually this petered out and I zig zagged round some bemused sheep through a damp field. Here a minor navigation fail saw me turning away from the river along a rough path when in hindsight I should have stayed with the river for a few hundred metres more. This error led to hopping a deer fence and dragging my bike through the trees up a vertical bank. Good exercise but it definitely added 15 minutes to the section and did nothing for my mood. Eventually I dragged myself to a clearing through the trees which led up to the firetrack shown on the OS map and I got the pedals turning again, slogging up a lumpy forestry road.

The next few miles were easier riding – wide forest tracks down towards the minor road through Fersit and then onto more good forest tracks in the woods above Loch Laggan. Eventually dropping down to the shore above Loch Laggan I was reminded of the reason for the unseasonably cold weather. When I planned this route I had high hopes for a nice prevailing south westerly behind me, on a route that goes in a pretty straight line north east. It wasn’t to be today though, and the few trees between the track and the shoreline did little to diminish the strength of the relentless headwind. Logging works near Ardverikie meant a brief detour back uphill and I was glad to drop down to the road by Inverpattack and out of the wind after a while.

Having wasted a bit of time with a broken spoke, a climb through the trees and a logging diversion I made my first decision to shun the track through the forest on the north of the A82 and head along the road in the sun for a bit and get to the warm coffee at Laggan Wolftrax a bit sooner. Or so I thought. It transpired that despite being the Easter break, the cafe at Laggan Wolftrax did not open on Tuesdays in early April. At the time of writing this, I understand that the Forestry Commission is considering developing the cafe / bike shop on site and the previous tenant, Base Camp Bikes has moved out, so the opening hours might be a bit different in future. At least the benches outside were in the sun, so I munched down a few bars before heading on, crossing the road and picking up a forest track and then a pleasant back road to Laggan.

Base Camp’s loss was my gain as the local shop in Laggan could not have been more pleasant. The owner was keen for me to warm up in a new waiting room they had opened for walkers across the road, but I put on a brave face and pretended the sun was warm, chatting to a few friendly walkers whom I had passed earlier and had now caught up with me.

Checking the route on my phone and OS map, I noted that the cold temperatures meant that battery was dwindling fast and my average speed was a bit slower than I would have liked. Thinking of the train ticket I had booked home from Aviemore I decided to ride on the road for a section, shunning a 9mi off road section along the River Calder to Newtonmore in favour of a shorter 6mi road instead. In hindsight it turned out to be the best option – soon after leaving Laggan the north easterly wind blew in a relentless barrage of snow and hail to soak and chill me.

Briefly sheltering in Newtonmore, I decided to press on, following the East Highland Way along the road to Kingussie, and shunning the suggested option of an offroad section to the north. From here on in, the weather was a mix of pleasant sunshine in short bursts, interspersed with longer hail and snow showers. The route follows the National Cycle Network in part and the riding was easy. Crossing under the A9 the official route detours into the forest in parts, but with my phone now showing single digit battery life and checking the plotted route not being an option, I decided to stick on the the back roads past Loch Insh, Feshiebridge and on towards Aviemore, missing what I knew would be nice trails through the forest past Loch an Eilein.

Sadly with the phone battery fading fast (I had shunned carrying the SLR camera today) you will just have to take my word for it that the duvet like piles of snow lying at the side of a clear road in the fading evening sun made for a stunning view  – definitely made me glad that I had made the effort to get out, even if I was not really following the planned route.

Rolling into Aviemore at 7pm, 9 hours after leaving Fort William I realised that far from being late for my 8.30pm train as I had once feared, I had covered my 123km quickly enough to catch the preceding train. In hindsight, I probably could have taken a little more time to enjoy the forest trails instead of the last road section, but at the time, with freezing hail showers and dwindling phone battery, I had been in no mood to pull out the soggy OS maps.

So I haven’t really ridden the East Highland Way, but I have ridden from Fort William to Aviemore in the same rough direction, and probably using 80-85% of the suggested route. Would I recommend it? If you like a big day out on the bike with stunning scenery and easy riding then absolutely. Life would be dull if all rides were like that (there are no real technical sections), but it is great to get out for these big simple mile munchers a few times a year. All of the sections I used were 100% rideable (minor scrambling through trees due to a navigation error notwithstanding), and whilst the route guide suggests that there is one sections prone to flooding, the route as a whole is definitely suited to mountain biking, particular a fast rolling XC bike (dare I say a 29er?)

Would I do it again? Possibly. Although I generally consider that I have “done” the East Highland Way, writing this up, it still annoys me that I used more road than I would have liked, owing to the weather. Maybe one day I will do it again properly. If I do, it will be in 23°C March sunshine, rather than 0°C April hail though. For now though, I have other routes to ride. More on that soon.

The GPX route for my ride is here if you are interested in the rough route.