With limited time to ride at weekends, I have been thinking about making better use of my time when riding at places like Glentress, and cutting out the wasted hour or two in the car occasionally. The trip to Peebles from south Edinburgh takes little over an hour on the road bike, but there is no obvious route for a mountain biker.

If riding to meet others, any route would need to be reasonably fun, short enough to be achievable (ideally both ways) and avoid too much road (which always feels like a bit of a slog on a mountain bike). There is obviously the Scottish National Trail section used on a previous ride, but I felt that something slightly more direct must be possible. After a few nights poring over OS maps, a handful of candidates were drawn up (more on some of the others in future no doubt), and a favourite was selected – a fairly direct route, and also using a fair amount of what looked on the map to be good rideable trails.

After months of busy weekends of racing and other plans, an ideal opportunity presented itself with my sister keen to be shown around Glentress. Originally I had planned to ride both ways (perhaps with a different route on one leg) to try out these routes, but this way allowed a slightly more sensible distance – driving to Glentress in the morning for a good first ride round the blue with my sister (and a walk for wife and son), the obligatory lunch in the cafe, and then a solo ride home.

The proper planned route starts close to the top of the black climb, so it made sense to tweak the start slightly and ride right to the highest point of the black (at the mast at Dunslair Heights), before cutting left on to a fire track, and heading north. Those keen to cut a mile or two will find a track on the map from the bottom of the “Britney Spears” section of the Glentress Black loop, which cuts across to the adjacent fire track, and would save the final climb up to the mast. 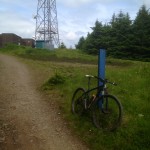 The turn off by the mast at Dunslair Heights, after climbing to the highest point on the black route. 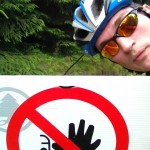 No entry past this point? On the wrong side of the line by some logging operations. Cheeky trails? 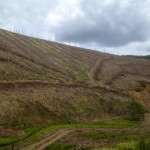 Empty hillsides between Lamb Law and Bowbeat Hill. I was thankful not to have to ride up some of those ridiculously steep logging tracks though. 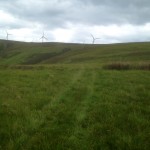 The faintest of trails leading between the windfarm and the valley floor. The track fades away completely higher up, and could be a slog when riding up, rather than down.

After a brisk, warm climb up the black route, the fire road descent allowed the legs a bit of recovery, but the drop in height is a bit disappointing – I have envisaged a flattish traverse across to the wind farm rather than wasting that well earned height.

The route is relatively obvious, being the main fire track for most of the way, although being a Forestry Commission forest, it is worth having some navigation aid since there are always a few generic looking junctions to confuse matters, and the trees do a fine job of masking any navigational landmarks.

After feeling liking dropping most of the height gained on the Black route (in fact only about 300m is lost), the route kicks up again past a barren felled hillside, and on to Bowbeat Hill. The wind farm at the top of the hill is a welcome distraction from the climb, and the track through to the northmost turbine is easy riding.  Here, the track abruptly ends, and I was left to partly ride and partly walk across a heathery section, through a gate and follow my nose towards the edge of the valley I knew contained a good track out.

After a couple of minutes following what could only be described as sheep tracks if you were feeling particularly generous, I picked up a slightly better grassy track which took me down to the valley floor and on to the gravel double track. Ridden in reverse, I suspect that there would be 5 minutes of walking for anybody slogging up a steep hillside on a faint track through the heather. 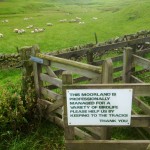 Apparently the local sheep didn’t get the memo 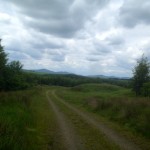 Flat, fast gravelly tracks through Toxside Moss, which is littered with small quarries and old debris. Only some flat miles and that range of hills in the background to tackle to get to Edinburgh. 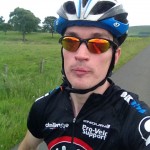 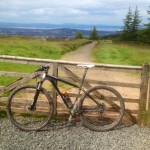 The top of the last descent when heading northwards – only the descent into Bonaly to go.

A fast blast to Gladhouse Reservoir made up for any time spent wading through heather (although look out for the axle-deep puddles in a couple of places on the main track). There is no obvious way of completely avoiding the roads here, but the quiet roads round Gladhouse are pleasant enough, and there are a couple of fire track options through Toxside Moss too. Back roads are the obvious way from here to Mount Lothian and on towards Penicuik (although it remains to be seen if this road will remain when the mine at Cauldhall expands soon).

Riding through Penicuik did have me wondering if there are probably better options for avoiding a bit more of the road, but these are easy miles, and the total percentage on the road still isn’t huge. From here, I chose to ride alongside Glencorse and over the Pentlands using The Phantom’s Cleugh (allowing me to drop down to Bonaly without any serious climbing), but the tarmac miles by Glencorse could probably be avoided. Unfortunately the obvious alternative is the grind up the Castlelaw climb, and I’m not sure that the legs could stand for that on a long, warm ride.

Generally a good and achievable route. Only a few minutes through the heather at the end of the wind farm is tricky to ride, and the road sections through Penicuik can definitely be reduced. There is a reasonable amount of bland forestry commission fire track, but at least those miles are quickly ticked off. I probably need to ride this in reverse to see how rideable the final pull up to the wind farm is, but this is definitely a candidate for a good way to leave the car at home.

Stats:
Distance: 53km (from the Glentress Trailhead, up the black and finishing in Bonaly)
Height climbed: 1,191m (a munro and a bit – mostly up the black and on to Bowbeat Hill – it is relatively flat thereafter, with the exception of the Pentlands crossing)
Water bottles used: 1
Water bottles I should have used: about 4!
Minutes walking: 1(ish)
Axle deep puddles: 1 (and 2 others ridden around after the previous lesson)
Hours taken: 3 (with a few photo stops en route)
Quad bike riding men carrying shotguns seen: 1

Strava link: here
GPX file: here
Bunnet to: @Stellite who ran the track up towards the wind farm after discussing this earlier in the year.