After last week’s failed attempt at combining “stages” 4 and 5 of my planned Scottish National Trail ride, I took advantage of the continued dry September weather to nip back to Comrie and finish the job off properly – 40 miles of mountain biking from Comrie to Pitlochry.

As noted on the last post, the logistics of a ride from Comrie were a bit of a headache, but this was solved by joining forces with VCM teammate Simon Fairfull (most of the rest of the VCM crew were jogging or slogging around West Yorkshire for the Three Peaks CX race), and leaving a car at each end of the trail.

After an 8.30 depart from Edinburgh, a car was abandoned in Pitlochry, and the fun twisty roads from Pitlochry to Comrie were quickly dispatched. The driving to the stage start meant we finally rolled out of the car park after 11am – setting off up the Deil’s Caldron climb I had ridden in the previous post, and on to Invergeldie where I had turned round little over a week ago. The track from here will be familiar to any munro baggers who have slogged up the grassy mound of Ben Chonzie – a good land rover track that quickly gains height for a couple of miles. We parted ways with the track before the slopes of Ben Chonzie kicked up too steeply, and turned north to head on up the valley. A good wide path narrowed to single track and eventually petered out for the last few hundred meters as we bogtrotted to the top of the bealach. From here, the map suggests continuing north for a kilometre or so, dropping into the valley, but with no obvious path, we cut the corner slightly to pick up a land rover track and drop down to the dam on the valley floor. 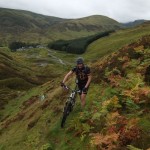 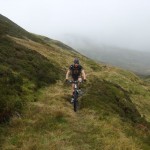 Climbing into the cloud alongside Ben Chonzie

Turning east, the path now follows around the back of Ben Chonzie. The route picks up the Rob Roy Way again, with flat land rover track miles down to the farm at Auchnafree. The track kicks up more steeply again here – a narrow single track climb above a burn with plenty of obstacles thrown in. Damp rocks and a worn Racing Ralph on the back led to more dabs than I would like – almost falling down the bank towards the burn in one moment of inattentiveness. The parts which were rideable were slow and technical, but satisfying.

After picking our way over and around the boulders, a Land Rover track is picked up by the Lochan, which dropped us down to the minor road Loch Freuchie and then the parallel fast doubletrack, alongside the River Quaich. Turning our legs to “slog” we turned up the steep road climb out of the valley towards Kenmore. This afforded great views back down the valley and at least allowed the height to be gained quickly. The reward was fast miles eastwards towards Aberfeldy – initially on good land rover tracks, ducking beneath the huge (and controversial) pylons of the Beauly to Denny power line, and finally on to the footpath alongside the Birks of Aberfeldy – great single track with little rocky step downs on the bends. 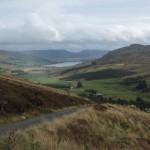 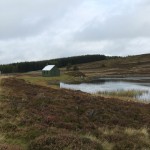 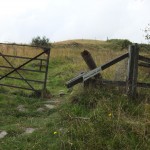 I’m not sure what good shutting the gate will do 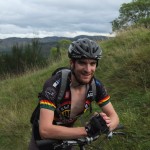 Simon bares all up the final climb

A coffee and some tablet refuelled us in Aberfeldy before a few easy miles of riding. Although pan flat, the path was generally tight and twisty – more entertaining than a path  squeezed in between the River Tummel and the main road eastwards had any right to be. Reaching Grandtully, a helpful signpost marked the footpath to Pitlochry and suggested that only around 4 miles remain. Excellent. What that signpost didn’t say was that half of those miles would be steeply uphill.

At this stage in the ride, Simon had a leg injury which was playing up – not ideal up a steep, often grassy climb. The trail was good though – single track that was satisfying to clean, with only a few ditches near the top to force a dismount. Over the top, we entered the woods and thankfully turned downhill again for a final fast blast into Pitlochry. Like the descent into Aberfeldy earlier, this was a fast entertaining blast through the trees, and was a great way to finish a good ride. A spirited drive on back roads to Comrie followed to pick up the other car. A good day out – another 40 miles of Scottish National Trail ticked off, and now well into Highland Perthshire. I am really looking forward to the next section from Pitlochry to Kingussie up Glen Tilt and down Glenfeshie, but that will probably wait until 2015. I need to earn a few more brownie points for these big days out first. 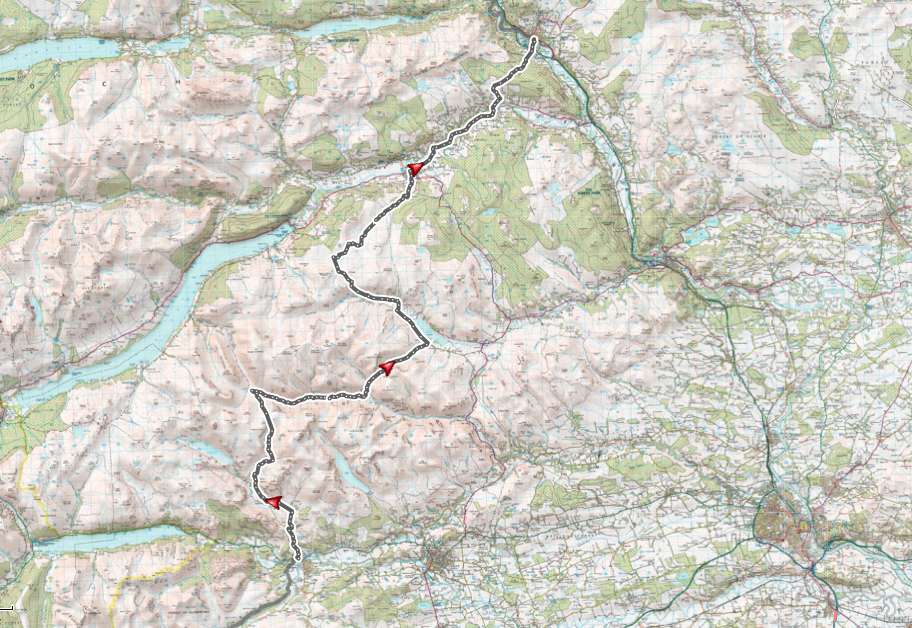 The GPX for the ride can be found here.

One thought on “The Scottish National Trail: Part 5 – Comrie to Pitlochry”