Whilst I do not intend for this page to be a summary of every race I enter, I thought that a few brief words about the Bowhill Duathlon Series might be in order.

I first entered the Glentress Duathlon Series a few years ago to try something a bit different, and to keep ticking over in winter. Friends who had entered previously encouraged me along, citing relaxed racing in a fun atmosphere. Although not a runner by any stretch of the imagination, I managed a short run once a week over winter and enjoyed doing something different.

For 2013, Glentress Duathlon organisers Pete and Elsie stepped back from the series, and Durty Events took up the mantle. A change of venue from Glentress to Bowhill Estate followed (as a result of onerous terms being applied by the Forestry Commission at Glentress I believe) but thankfully the same large field (around 150 people entered) and lighthearted atmosphere de-camped down the road to Selkirk. 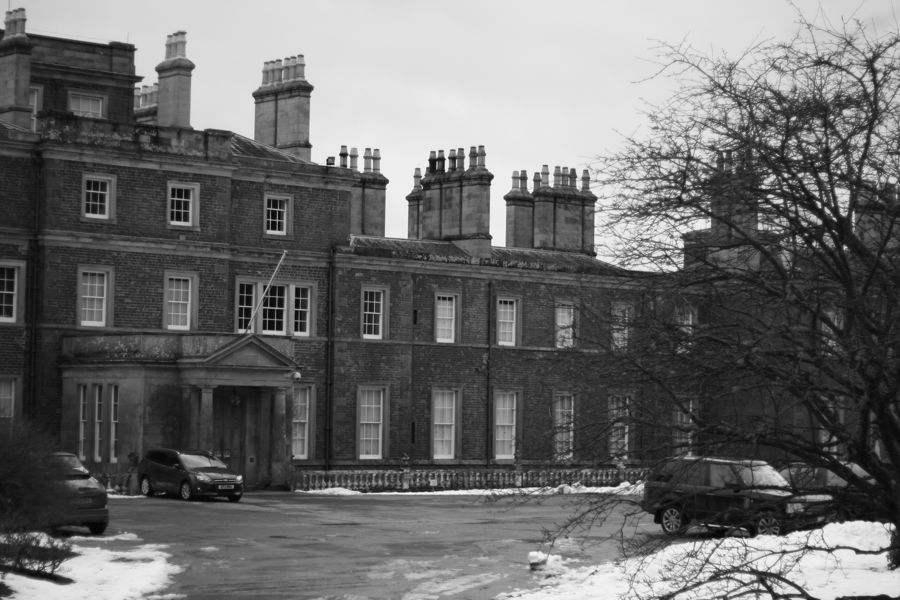 The first (short) race was set on a bright but cold day in December. Temperatures of around -5 made for interesting conditions on the short tarmac sections of the course –  ideal for showing off my best bambi impression but not great for running. I plodded round the 5k run and undoubtedly lost a bit of time by being too cautious on the ice, before jumping on the bike. Run followed by bike probably suits me as I can take my time on the run and push on the bike, knowing that I can ride harder than I can run. I managed to catch and pass a good number of other riders through the woods and on the firetrack sections and was pleasantly surprised to cross the line in 4th overall behind a relay pair and a Veteran racer, so 2nd in category (senior male).

The second (medium) round was held in equally challenging conditions. After a week of heavy snow showers, the temperature rose in the days leading up to the race, leaving a mix of deep slushy snow and axle deep snow melt puddles. The medium was billed as a 30min bike section followed by a run of a similar duration. A rather worn Racing Ralph rear tyre which I had been running for the best part of a year was not ideal climbing on slush, and after staying with the leaders initially, I was soon spinning the back tyre and lost contact. I plodded round at a reasonable pace, with a fairly useless rear brake preventing me from taking too many risks in the twisty bits, and a lack of time on the mountain bike meaning that I could definitely have done better in the rutted firetracks. I was caught near the end by another rider, although as he was in a relay team I decided not to race him, and followed closely into transition. A steady plod round the run saw me quickly pass the mixed team runner and I was told soon after by a marshal that I was second. I could see the third place runner gaining on me for much of the run, but I held him off to finish 2nd overall, and 2nd solo senior once again. It turned out that the vet rider who had led after the bike had missed a turn on the run and added substantially to his time. I suspect he (name not typed to save the embarrassment!) is still kicking himself. 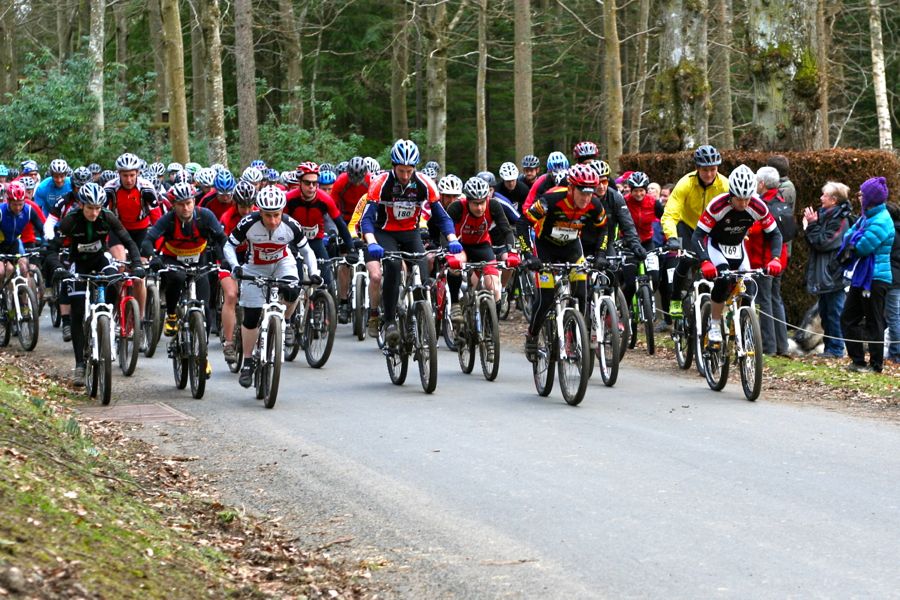 After the Race 1 winner (Rory Downie) had not attended Race 2, and the Race 2 winner (Kie Jackson) having missed Race 1, I was the surprise series leader going into the final round. Following a glorious week of dry February weather, I was hopeful that my bald rear tyre might prove to be an advantage for once. The morning of the race suggested otherwise – I awoke to an inch of snow in Bonaly and uncleared roads in the area had me wondering whether I would even make it to the start line. A quick wheel change in the garage for a 1.8″ mud tyre on a tatty old wheel and I was off. Thankfully after crawling round the bypass in traffic at 20mph, the roads cleared, and by the time I arrived at Bowhill, the sun was out and there was not a flake of chaos powder to be seen. Having gotten a few more miles in on the bike in February than January, I was feeling a bit fresher and happily slotted into 2nd place on the long firetrack climb on the bike. Tapping out a steady tempo, my ambition was simply to stay with the leader as long as I could, knowing that I would not be able to hold on for the whole race, but also that the leader was a vet rider that I would not be racing. I stuck with the pace for about a third of the bike section, matching the little digs for a while before a ridiculously steep climb saw me drop off the pace and plod round on my own for a while. Again, the lack of mountain bike time told as I misjudged a few lines through muddy double track, and then jammed my chain on a sharp right hander leading from a descent straight into a climb. A couple of other riders caught me, but I kept a steady pace for the final section and came into transition in second.

Knowing that I would struggle on the 40min run if I pushed too hard, I took my time in transition, leaving in 4th, but soon catching a runner from a mixed team. The runner in 2nd was just ahead but was clearly a much keener runner than me and gradually pulled away. I knew I just had to hold off as many runners as I could, but one competitor flying past me as if I was standing still suggested that would be easier said than done. Missing a turn over a stream crossing did not help, adding 20 seconds and wet feet to my run, but after a steep run through the trees to the turning point and some banter with the marshall, I was happy to see on the return leg that the next competitor was not too close behind. The rough nature of the run through uncleared woods, jumping fallen trees suited me – taking my mind of the fact that I find running a bit of a slog. Returning towards the finish line I passed the vet rider who had led after the bike, and although the pass did not count for anything, I felt fresh and pressed on to the finish – 3rd overall and 3rd in category. The finish line sprint suggested that I should have pushed harder on the run, but after a 48min run, I doubt I would have been able to catch 2nd place 2 minutes ahead in any case. 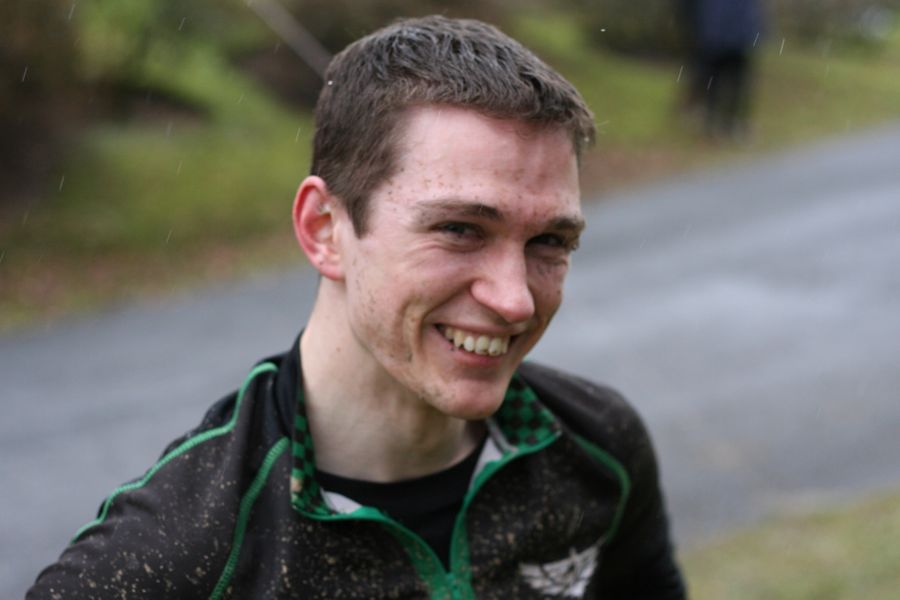 So despite not winning a round, two 2nd places and a 3rd was enough to comfortably take the series win. I am under no illusion that my running pace is some way off of the winners of each round, but it is good to be able to put in consistent efforts over winter. The mountain biking perhaps is not quite as grin inducing as the swoopy Glentress trails, but there was enough singletrack and close racing to keep it entertaining, and I even enjoyed the rough offroad nature of the run in the final round. Durty put a great effort into creating different courses for each round and I found the atmosphere relaxed with good laughs with other competitors before, after and sometimes during each race. If you fancy something a bit different to keep the fitness up over the winter, I would happily recommend a jaunt down to Bowhill in 2013/14. I’d recommend taking a rear tyre with some tread though. 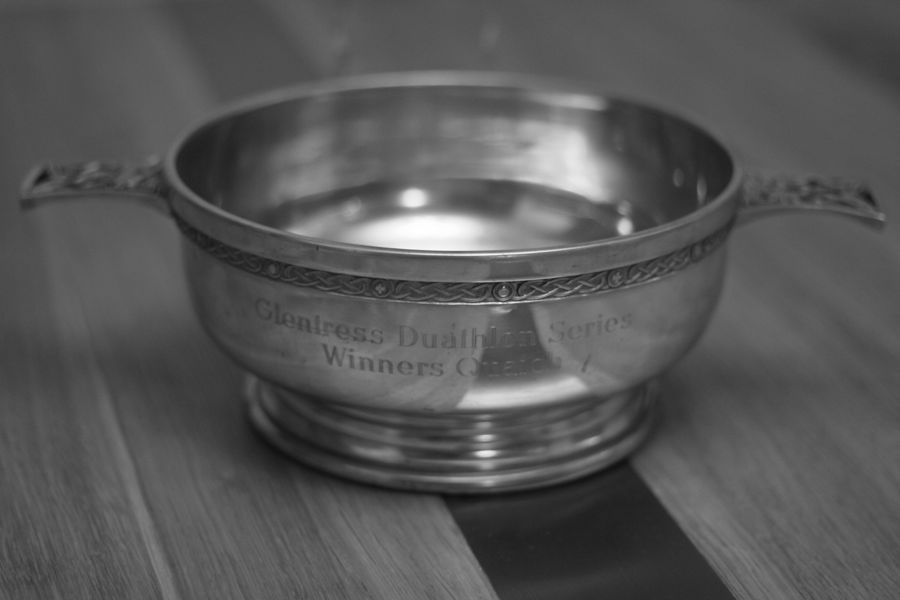