A ride of two halves. A couple of days after the last section (long enough for a few days recovery), I used our Fort Augustus holiday cottage as the handy base for the next section of the Scottish National Trail. Although I had initially planned on separate sections between Fort Augustus and Cluanie, and then Cluanie to Morvich, I wondered about combining the two, since I am not in this corner of the world often, and it would be good to tick off a few miles.

The weather for our holiday week was dry but breezy and not particularly warm. Still, you can’t be too greedy in April, so this would do, and so I headed out early, leaving the understanding Mrs W to entertain the boys.

The first section from Fort Augustus was predictably easy – westwards along the canalside path following the Great Glen Way and then along the old railway line on the south side of Loch Oich, before heading round the head of the loch and into the forest above Invergarry. Good forestry roads allowed some quick miles to be ticked off down to the farm at Greenfield and then across the narrows of Loch Garry and on to the public road – apparently the longest dead end public road in the country.

As expected, the turning off the road a mile or so west of Kingie marked an abrupt end to the fast miles. The footpath up and over the shoulder of Mam na Seilg was obvious and fairly well made, but damp in places and generally just too steep or rough to ride for any great length. Ride a few hundred metres, walk a few hundred metres, repeat. The descent was little faster – interspersed with boulders and rocky slabs it was reasonable rideable, but I had my head dialled to full on mincing mode, and opted to walk more than I should have. I had not passed anybody for miles, and this was not the time for a silly spill. The lower section gradually flattened to a heathery and grassy valley bottom – more rideable but little faster. 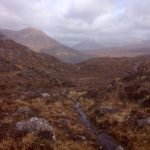 Looking down the descent to the old “Road to the Isles”

No sooner had I waded across the River Loyne (mercifully low after a few dry weeks) and squelched along the bank on the other side, than the path headed sharply upwards again – rocky climbing (again generally too steep or loose to ride) over Creag Liathais. The summit plateau was relatively flat and allowed for better riding on a good, obvious path, before a short, enjoyable descent down to the what is left of the road to Loch Loyne – the old “Road to the Isles.” Apparently in dry months, turning east down the road allows the old bridges to be visible in the loch which was formed when the glen was dammed for a hydro scheme, but today I was turning north west for the short fast run down to the A87 at Cluanie – slowed only by a stinking westerly headwind, and a huge herd of deer brazenly blocking the road.

I rolled up to the inn at Cluanie way behind schedule. Having already read the route guide for the next section to Morvich, I suspected that the riding would be no quicker, and given that on current pace I was likely to be an hour late for my scheduled wife-driven taxi ride home, I elected to put my feet up with a coffee at the Inn.

Curiosity got the better of me as I waited for my lift home though, and I rode up the first mile of the next section on An Caorann Mor towards the Alltbeithe Hostel. A stiff climb on a good wide path suggested easy riding, but the route guide and the narrowing alongside a burn on the OS map suggests otherwise, and that boggy fun will be saved for another day.

Another short section ticked off – good views, barely a soul in sight all day and still an enjoyable day out in the hills. 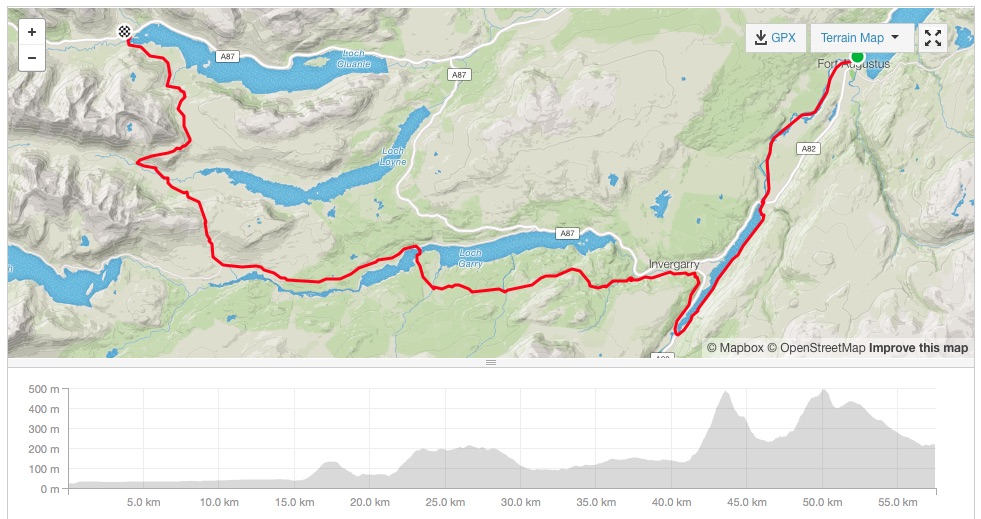 Scores on the doors: