A post that I wrote for the Velo Club Moulin blog…

Tap tap. Is this thing on? Time to blow the cobwebs off the VCM blog. The lack of posts suggest that everyone has been too busy making the most of the first Scottish summer for about five years. More riding, less writing. You can’t waste opportunities like these. Dusty trails needed to be shredded before everything reverts to standard Scottish dreich (like today).

I can’t speak for the other few dozen VCM reprobates, but one of the highlights of my summer was a cracking two days riding a Cairngorm loop with Simon Fairfull in late May. We dismissed THE Cairngorm Loop as we only had two days, and whilst the full 300k route is of course more than do-able in that time, we elected to do a slightly shorter version so that we could enjoy it, rather than making it feel too much like a race.

After some scouring of maps and consultation with Scottish bikepacking oracle Russell Stout, we settled on the lesser known “Tour of the Cairngorms” route:- most of the outer loop of the Cairngorm Loop, but eschewing the Aviemore section in favour of Loch Morlich and Glenmore, and then finishing down Glen Tilt rather than climbing up to Fealar Lodge and the south east side of Beinn a’Ghlo.

Basking in late May sunshine we set off as pasty faced Scots on a Sunday morning (I elected to ride some of the first day in a running vest to keep cool, but the less said about that the better). The first few hours out of Blair Atholl were ticked off at a worryingly easy pace. Without trying, we were averaging over 12mph for several hours. This didn’t feel like the bikepacking I’m used to. Gaick Lodge was dispatched and onwards down to Feshiebridge and a brief return to civilisation at Loch Insh. After seeing barely anyone for the first few hours, we knew that the section through Rothiemurchus and Loch Morlich would be the busiest of the route, but nothing could prepare us the bank holiday Sunday on Costa del Loch Morlich that faced us. Thousands of lounging Scots completely covered the beach and the main Cairngorm road was a double-parked strip of tarmac carnage. We stopped for a drink and ice-cream to soak up the hilarity of it all for 15 minutes before getting the hell out of there as quickly as our laden bikes could carry us. As expected, 20 minutes later and after passing the Ryvoan Bothy, Highland normality was restored and all was blissfully quiet again, save for the crunch of tyre on gravel, dust and pine needles. The next few hours saw a gradual slowing of pace as weary legs began to take their toll and the route became just a little rougher. 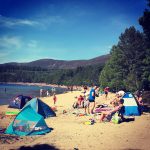 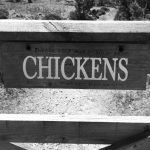 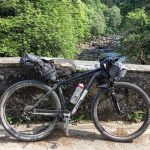 We had set our sights on Tomintoul for dinner and a camp spot somewhere along the river just out of town, so we rolled into the town square eager to fill hungry stomachs. Perhaps it was the sight (and smell) of two tired cyclists that caused the reception (or lack of), but something felt decidedly odd about the town. In a town square filled with restaurants and hotels we eventually honed in on the one with outside tables and the most buzz about it. That was our first mistake. Apparently we would have to wait over an hour for food (on a Sunday evening in May?!) so shuffled across the road to the next pub. Despite a close call where our requested ‘orange and lemonade’ was almost served as a bowl of sliced oranges and lemons, we were filled with generic greasy food which at least replenished some burnt calories. Limiting our losses we set out for a third hostelry for our post-dinner pint, and nipped into what looked like the smartest / newest hotel in town. Despite the white tablecloth attempt at an upmarket look, the barman was at pains to stress that grubby bikers would still be welcome, and so our cold pint was enjoyed over a discussion with a barman who turned out to be a mountain biker (and a pretty fast sounding enduro rider). Result. Oddly, the only other family in the bar elected to leave soon after we arrived. My damp shoes from that river crossing must have been smelling pretty bad by that point.

We had planned to ride a few miles out of town and pitch near the river somewhere, but our helpful barman pointed out that the Highland Games field would be empty, flat, closer, and suffer less from the evening midges which were undoubtedly congregating by the river keen for an evening feast. In a win-win for everyone we ordered a few more pints since we wouldn’t have to pedal far to our new not-so-wildcamping spot.

Day two was due to provide a shorter ride (85km vs 120km on day one, and only 1,000m of climbing vs 1,700m). The first few miles south down the River Avon road and track were easily dispatched, although in a slightly annoying fashion as every punchy climb was followed in short order by a descent back to the river. “Somebody” had glanced at the map on his Garmin screen and naively assumed that the high point of the morning’s climb over to Braemar was at Loch Builg. It therefore came as something of a surprise to have to climb a further few hundred metres over the shoulder of the adjacent Corbett. Oops. All good character (and appetite) building. A fast descent to Braemar and welcome coffee and brunch followed in the always excellent “The Bothy”. 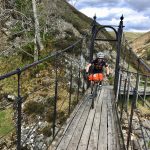 Bridge over the Falls of Tilt

Tour of the Cairngorms

One of the benefits of this chosen route is that we knew the following section would be relatively flat and easy, and so it proved. The ride past Mar Lodge was uneventful on the way to the Geldie ‘Fords’. A bone dry May allowed the river to be pedalled over without difficulty and onwards to the top of Glen Tilt. A momentary SPD-fail style topple saw Simon turning his leg into a quite impressive balloon which wasn’t ideal, but thankfully the mystical properties of some recovery Haribo allowed us to continue southwards, with the promise of a dip in the river still to come. Having ridden this section before a couple of times, I knew it would be an easy blast to the finish after tight singletrack at the top of the glen. Pedalling back into the promised land of well-earned sugary drinks and ice-creams in Blair Atholl we passed a couple of fresh looking riders heading up towards the loop. Knowing nods were exchanged. This was Scottish summer bikepacking at its best – memories of great riding that will last even longer than those sunburn marks.